“Women’s health needs to be front and center- it often isn’t, but it needs to be”- Cynthia Nixon 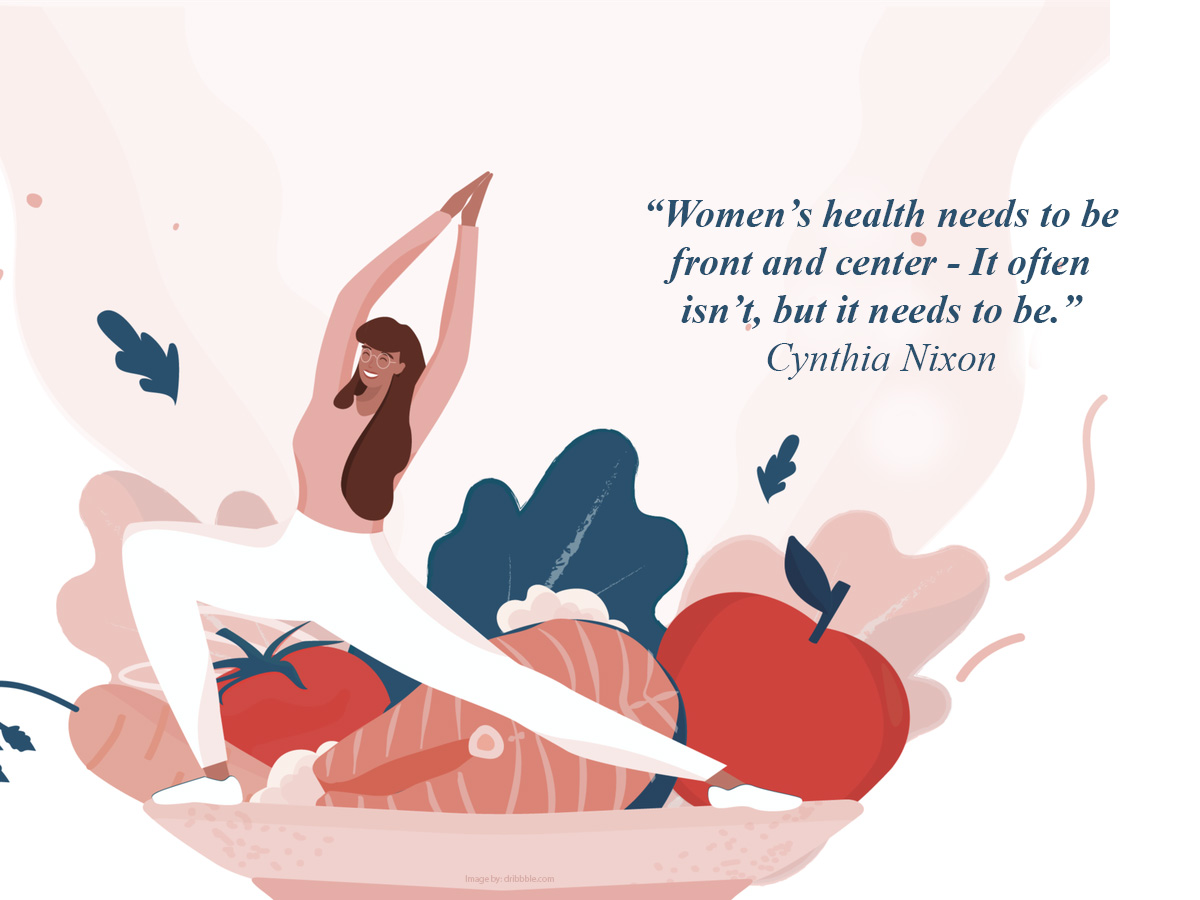 From being confined within the houses to going out to earn living, from balancing and managing the household chores to winning medals for the country, women have proved themselves on all the platforms of life whether it be social, political or scientific. Women came out with flying colors and invincible grace. Although we have seen a huge development in the condition of women, but their health remains a major concern for not just women but the whole society. Their health has always been taken for granted by them and others. They have been taken as the sacrificing and understanding part of the society that possess the motherly love. What remains ignorant is that before being a woman she is a human being and every human being can feel pain and hurt equally as they feel love and compassion.

The reason their health has never been prioritized is because it was never considered that important for many different reasons and women not being treated as equals tops the list. While few of the other reasons are being lack of education and facilities, unawareness, ignorance and being hesitant. A life full of restrictions within the boundaries of generalized and forced norms created by the male dominant society which teaches you to keep your mouth shut and suffer in silence somehow, makes it usual for women to suffer in silence and not to talk about their problems. The reason behind the higher rate of women suffering from depression somehow lies in the same and women have learned to live with these things with such an excellency that now they find it hard to finally change, when things are changing for better all around the world. After the struggling and suffering of many years’ women have walked a very long path along with men and a lot has changed since then as mentioned above.

These changes brought many other changes with itself and now people have started thinking about women’s health and wellbeing. People are finally talking about their importance in the society not just as a mother and the housewives but as part of society which holds the equal place in the society as men however a better understanding for the same is still needed and we still we have a long way to go, when it comes to women’s health.  So what are the major health concerns related to women:

All over the country heart diseases are the leading cause of increasing rates of deaths in both men and women. Women have the higher percentage of deaths by heart diseases as compared to men reason being ignorance towards the risk factors.

Maternal deaths remain one of the major reasons for the death of the women worldwide. Unavailability of health facilities, proper guidance and lack of family planning happens to be the main cause of fatalities caused during pregnancy. Proper guidance at the right age can solve problems like teenage pregnancy, unwanted pregnancies malnourishment etc.

WHO reports “Sexual and reproductive problems are responsible for one third of health issues for women between the ages of 15-44 years”. PCODs, leucorrhoea, sexually transmitted diseases, urinary tract infections, infertility etc. are the types of reproductive health related problems which not only affects their reproductive health but also affects their mental and overall physical health and strength, restricting their capability to grow naturally.

Having multiple partners and not using protection causes Sexually transmitted disease that one contracts from their partner through sexual intercourse. STDs like HIV & HPV could be life threatening while other STDs like   gonorrhea, syphilis and chlamydia are the kind of disease that if not treated timely may cause infertility, stillbirths.

Many studies suggest that women are more likely to suffer from depression, anxiety and stress problems. Hormonal fluctuation in the body leads to Premenstrual syndrome which is quite common in women then there is premenstrual dysmorphic disorder with similar but amplified symptoms other than that there is menopause, baby blues etc. Any Vaginal infection or hormonal fluctuation causes mood swings and stress. If looked closely there are many other more reasons that are responsible for the same including any kind of violence, social norms and stigmas etc. which causes traumas and become the reason for depression, anxiety, stress and low self-esteem.

There are three types of cancer that are majorly affecting women are breast cancer, ovarian cancer and cervical cancer. According to Cancer India Organization “Breast cancer is the most common cancer in women in India and accounts for 14% of all cancers in women” while “Cervical cancer is the second most common cancer in India in women accounting for 22.86% of all cancer cases in women and 12% of all cancer cases in both men and women”. They also suggest that “One woman dies of cervical cancer every eight minutes in India” and “For every two women newly diagnosed with breast cancer, one woman dies of it in India”.

This is not just it, there are many other diseases and infections that harm women intensely. Now the question arises is, what are we doing to fight these problems. Many steps have been taken many awareness programs have been started. What else we can do to spread awareness in this contemporary world is to, use social media as source of information. We all are well aware that Covid-19 brought us closer to our phones, internet and social media hence, there is no better way to express ourselves, our worries and major concerns through using social media platforms in easier and simpler forms like visuals, stories and videos etc. However, there still remains a huge part of society that don’t have access to internet and social media and if somehow they do, they don’t understand how to access and use it. To reach them, campaigns can be arranged in different regions while television and radio could be one of the best possible way to spread awareness through short stories, documentaries discussions etc. Enhancement of education system and making it accessible to everyone is something that need not to be mentioned. Then one more thing that needs to be done is arrangement of surveys in different regions to get a wider and better view of the problem. However, it’s not that we are totally oblivious to our problems it’s just we don’t stay cautious enough therefore, we as a society need to open up about ourselves and our problems. It’s high time we need to understand each other rather comparing shunning and shutting ourselves and people around us and in order to do that we need to know about ourselves, our bodies, our vital organ and how they function. As rightly said by Jillian Michaels that “At the end of the day, your health is your responsibility”.